As rallies go this is a little slow on the exhibitor and seminar side.  (We are again combining two days into one post.)  On Tuesday we started out with a coffee (hot chocolate for Miss Peggy 🙂 ) and donuts, and then went to hear Rod Coe from Yankee RV Tours.  If you have ever thought about a RV tour –  check out their website.  Rod does it right, he gets only the best sites for RV parking, knows the best restaurants, and has personalized guides everywhere they go.  He is very serious about making the tour the best you will ever do.

After listening to Rod for 90 minutes we went and did a little work at the fifth wheel, and then went to a movie.  On the way to the movie we got a burger and I found there was a Whataburger in the area.  We had never been to one, and boy are they good!  The movie we went to is Do You Believe?.  It is done by the people who did the God’s Not Dead movie and has stars such as Lee Majors, Cybill Shepherd, Brian Bosworth, and Mira Sorvino.  All I can say is don’t miss this great movie!

We got back to the equestrian center and went for a ATV ride on their horse trails.  We took over a mile ride, I didn’t know the trails in the woods were so extensive.  We will try to take another ride and take the camera with us.

Tuesday night we had roast pork dinner with all the trimmings and it was an improvement over the chicken from Monday night.  Our entertainment was Brent Burns.   He is a great comedian and song writer.

On Wednesday we again had the coffee and donuts, then again listened to Rod Coe talk about the Canadian Maritime Providences – he is that good.

Miss Peggy made mini pizza for the two of us and we went to Fort Pickens (part of the Gulf Islands National Seashore)  The fort was built-in 1829 and in service through World War II.  At one time 1800 men were stationed here.  Lots of walking and lots of history.  21.5 million bricks were used in the construction!  A single battle from the fort during the civil war is believed to be the largest bombardment in history. 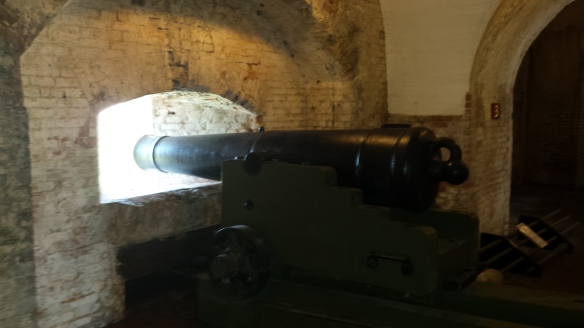 A rose in the war zone.

The canons could cover the entire harbor entrance. 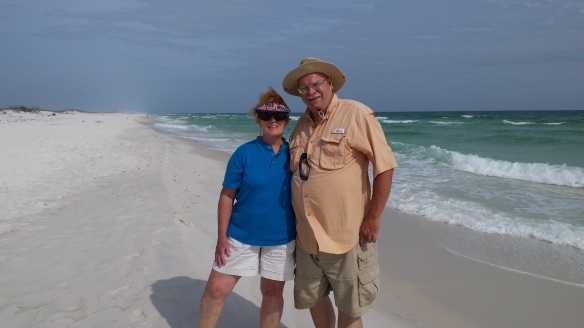 Miss Peggy and I spent some time enjoying the beach.

This evening we had a diner of gourmet Chinese food and it was pretty good.  The evening entertainment is Debbie Owen and Tony T.  The played oldies from the 50’s, 60’s, and 70’s. and they are pretty good.

They played and sang for two hours.  We are getting to bed late tonight!

Check out our page on RV Budgeting.

Instead, speaking the truth in love, we will in all things grow up into Him who is the Head, that is, Christ.
Ephesians 4:15

Save money by shopping at our favorite place for RV supplies and electronics. Just click on the logo and save.