I got up early today and went into Lake City while Miss Peggy was still in bed.

My first stop was Wal-Mart for full synthetic oil (12 quarts – $62.82) for the Big Red Truck.  Next was Tire World to talk about tires, then Lake City Tires, and lastly to Tire Kingdom.  Tire Kingdom finally solved the mystery as to why there are two Michelin tires with the same number (LTX m/S2) but different prices.  Michelin is doing a slight change in the makeup of this model tire and the old version is $15 less.  They found six of the old version tires in Dallas (that’s Texas) and I couldn’t justify the shipping to save $90 let alone not know when they will get to Lake City.

Tire Kingdom guys were really helpful and the prices were pretty close (not far from Discount Tire or Sam’s Club) so we ordered the new version of the tires, for an install on Monday morning.

Then it was off to Advance Auto to get two fog light bulbs for the Big Red Truck as one burnt out.  (I wanted to move up to a higher output fog light so I bought a pair at $29.00, ouch!).  I also bought some Marvel Mystery Oil to soak the head of our outboard motor in as it hasn’t been run in two years.  Finally my last stop was Jiffy Lube to get the oil changed, $57.77 plus the cost of the oil at Wal-Mart.  I called Miss Peggy and found out that Shirley’s Restaurant in Lake City had all you can eat shrimp for a lunch special for $8.95.  I picked her up and back to Lake City we went.  Great Shrimp.

We had met Karen a number of days ago.  She is a single retired gal who built her own RV from a new GM Sprinter Super Van and has been full timing  for 1 year this month.  She travels with two cats and lets them roam where ever she parks, and they love it.  She was telling us about geocaching a few days ago so we downloaded an app for our phone while at Shirley’s.  On the way back to Ocean Pond we tried to find a couple of geocaches to no avail.  We realized that we needed to put our  ATV’s GPS into the loop for this project. 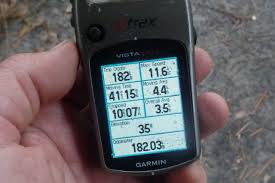 I need to calibrate my GPS!

Geocaching is where someone hides the “cache” and you are supposed to find it using your GPS coordinates or other directions.  Back at camp while I was topping off the air conditioner in the Big Red Truck with “Freon”,  Miss Peggy dug out our GPS from the ATV, and I  put in the coordinates of a “cache” close to the camp.  Before we walked to it, 2 other people came over to help us.  I ended up ankle deep in the swamp coming out with thorn punctures all over my arms.  I must have typed in the wrong number.   By then another person showed up to assistance us.  We put another set of coordinates into the GPS and took off looking for another “cache”.  One of the guys “helping” was called back to his camp by his wife, but another then showed up to “help”.  We finally found this one, wrote our date and Miss Peggy’s geocache name “Landyachty2” in the notebook inside this “cache”.  So after 90 minutes of looking, we found numerous mosquitoes, five new friends, one “Cache”, swamp water in my shoes, and one tick!  We could have done without the last guy.  After coming out of the woods. two more geo-trekkers came up.  We were invited to go to dinner about 20 miles away with a bunch of geo-trekkers and off to a gathering tomorrow – all day!  Having to change shoes, find bandages, strip down for a tick search, and get bug spray – we declined.  Now we aren’t saying this geocaching “fun” is all bad for us, but further adventures may be done from the back of our ATV! 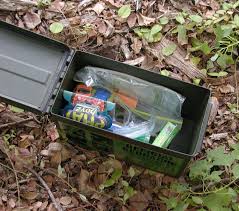 People left some of their “goodies” inside this geocache.

Tomorrow – weather providing – we are off for a big adventure and mini-road trip.

Check out our new page above regarding RV Budgeting.

Save money by shopping at our favorite place for RV supplies and electronics. Just click on the logo and save.